Red Dragon TV is an Internet television broadcasting station that broadcasts only independent media. Our mission is simple: to provide a highway for independent talent to be seen around the world.

“Red Dragon TV has truly morphed into the vision I had 20 years ago. I love handing an independent artist the microphone, getting out of the way, and letting them shine on.”
– Ari John 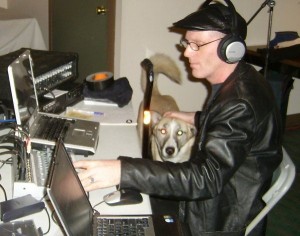 Red Dragon TV is not a Business. The focus has always been a grass roots effort, to make a program that was different from what was being done. The program started out around the beginning of 2007. At the time Mr Stephen Lee Rich was running an Open Mic out of the Escape Java Joint. Our Broadcast literally launched from this weekly event. We first started out by filming each Open Mic. Then Ari John White Wolf would edit them into segments. These segments went onto YouTube. The Picture to the Left is Ari John White Wolf and his Service Companion Hermes.

Red Dragon Free Press was our embryonic name back then. we would archive artists who performed onto our youtube site. It was way ahead of the curve at the time. If you did a search for “open mic” there would only show a handful of returns. Now, it seems everyone is filming their Open Mic forums. It became quite clear early in the game, the only way to stay competitive with other grass roots film producers was to implement a video live stream. Radio sound web broadcasting was already over done, but the video had not been touched, so it was a natural growth. 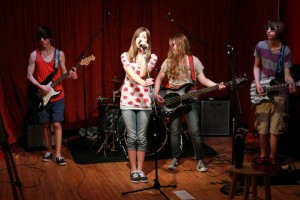 We discontinued the Open Mic in January of 2012. But that has not stopped or slowed us down one bit, our programs continue. We have several outstanding programs in existence. The longest running of these on Red Dragon TV is Inna Godda Davida, it has morphed into many different styles of broadcasting. 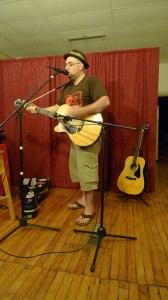 When Inna Godda Davida first started out in 2009. The primary focus of the show, was to share independent artists video. Then for a while we were doing a lot of interviews. Now we are in its final progression. We have taken it to new levels, it is an interview and entertainment show.

On Tuesdays starting in the Fall of 2011, Red Dragon TV started to produce and broadcast The Tommy Franklin Show. Tommy is a creative, and energetic dynamic individual. He owns his own clothing line, and is a Clothing Designer. His Label is Sexy Fag Designs. Tommy has a variety of Guests and topics on his shows.

The Andina and Rich Comedy hour is in it’s Third Season. This program is a one hour show that is pre-recorded for the Sunday evening broadcast on Red Dragon TV. The show is music and gags, along with various skits and oddities. We hope you have as much fun viewing this program, as we have filming it.

Escape to Music is another of our programs. This one is a combined effort of the Madison Songwriters Group, and Red Dragon TV. Sam Spindler is the host of this entirely music video review. 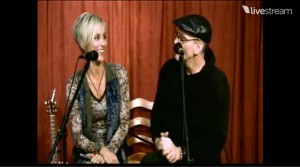 We do not know what the future holds for Red Dragon TV. It is our sincere hope to do remote broadcasts. Putting live events at the finger tips of people, who may not get to attend otherwise.

We would like to secure the building we’re in in Madison, allowing for a permanent staple in the Madison entertainment scene.